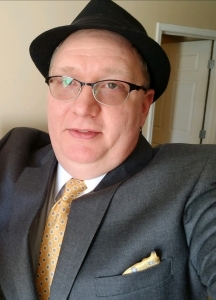 Jim Laymon, co-founder of ZOS films.  I was bitten by the “bug” at a young age started in elementary school, but got chicken pox the day before the performance so that was out middle school I didn’t pursue it because you had to be in choir. In high school I wanted to be in drama and couldn’t join until the 10th grade so I did love working on the sets trying out for leads kept getting beat out by seniors who were going to graduate.  We did two plays a school year my senior year I nabbed the lead in both plays after high school I worked on two independent films one a artsy one and the other a Christian one.  I enjoy being in front of the camera than behind it.  I directed and wrote a church skit once went well but not my cup of tea so to speak and I helped direct a little on our first film