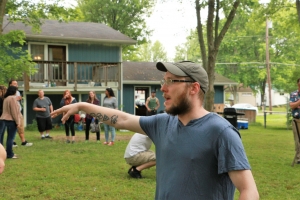 Bill Gelineau was born in Denver, Colorado, before eventually finding his way to Grand Rapids, Michigan.  He spent his childhood playing sports, producing music, acting in theater, and writing short stories.  While in high school, he got involved with the audio/visual department where he teamed up with Jeremy Kayser to learn the basics of film and audio production.  He followed his passion of becoming a musician for some time before getting a role as an extra in a zombie film, where he met up with co-founder of ZOS Films, Jim Laymon.  He directed the first set of ZOS Films short films, including: “Home Is Where the Soul Is” (2015), “Homecoming” (2016), “Joust” (2017), and “Homecoming II” (2018).  Bill is currently producing several films at this time, including ZOS Films first feature film “Grindhouse Collection”, scheduled to be released in 2020.